We don’t only have experience with the popular Angkor Archaeological Park, we are also very knowledgeable about other places of interest around Cambodia. About Angkor Cambodia can arrange tours to all provinces in Cambodia and below are some of the most popular destinations for visitors to the Kingdom of Wonder. 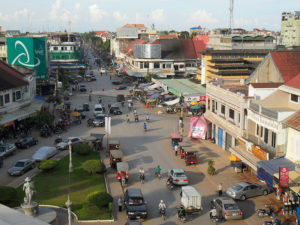 Battambang is Cambodia’s second largest city and is growing in popularity with tourists. There are many things to see and do in Battambang town and the surrounding area.

Battambang has a long history and after the fall of the Khmer empire, it was annexed by Siam (now called Thailand) where it remained for a few centuries. It was only after the French occupation that it was finally returned to Cambodia. As a result of this, the city is full of various architectural influences including Khmer, Thai and French. In the old quarter of town, you can see old colonial style buildings sit side by side with traditional Cambodian buildings.

Some popular attractions for tourists in Battambang include the Bamboo train, the bat cave, Wat Banan temple, Phnom Sampeau and Wat Ek Phnom.

Wat Banan temples was built by King Udayatidyavarman II (1050 – 1066) and it was dedicated to the Hindu God, Shiva. It’s got a huge green canopy around the site and it’s still perfectly intact. The carvings on the lintels and pediments are still in very good condition. You can climb from the east entrance and get down from the south. Banan temple was reconstructed by King Jayavarman VII and was converted into a Buddhist temple with five towers facing to the east.

On the way to Wat Banan, we can stop to see Wat Kor Village and explore Wat Bay Damram where you can see 1000 bats which have lived there for over 100 years.

Baset temple is another popular destination in Battambang and it’s name emerged from the inscription “Ksedrapura” which means the “Agricultural City”. It was also built in the 11th century and is located nearby Baset village. This early temple was destroyed during the civil war which followed the Pol Pot regime and it has been recently restored. During the restoration process, they found hidden statues of Hindu Gods. Baset is a large complex and it is recommended to visit because on the way you travel through some beautiful Cambodian countryside.

Wat Ek Phnom is an 11th century temple which was constructed by King Yasovarman (1006 to 1050). The towers and wall are still largely intact. Many locals like to visit during Khmer New Year and Pchum Ben festival. You can see Buddhi trees around the temple complex and you can explore the pagoda with lots of intricate carvings depicting the background of Buddha.

The three towers of Wak Ek were destroyed during the Khmer Rouge regime. The stones were used to pave roads. The carvings on the lintels and pediments depict Hindu episodes such as Ramayan, Churning of the Sea of Milk, and Mahaparata.

Phnom Sampov is the home of ecotourism in Cambodia. You can explore caves and visit religious monuments in the area. Phnom Sampov is very popular with both foreign and Cambodian visitors. People enjoy exploring the site and learning the story of a prince who wanted to marry a beautiful woman. The woman was the daughter of a rich man from Banan.

During the Khmer Rouge regime in 1975 – 1979, many victims were killed here and the bones and skulls are still visible in the cave. You can climb the mountain or ride a motorcycle up.

Phnom Penh is the nation’s capital city and home to nearly three million people. It’s a large, sprawling city with a hidden charm that many visitors find irresistible. There are so many things to see in Phnom Penh with the majestic Mekong River, the stunning Royal Palace, and the Silver Pagoda.

You can also visit Wat Phnom which is a temple which sits on top of a hill and there is a museum in the grounds too. Moreover, Phnom Penh is home to the infamous S-21 which is locally known as Tuol Sleng. This school turned prison was used by the Khmer Rouge to torture and execute people they deemed traitors. Many people that were sent to Tuol Sleng never left.

Moreover, there is the famous killing fields. This is the site where the Khmer Rouge would routinely kill and dump he dead bodies. It’s a harrowing, yet must-see story of the pain that many Khmer people went through during the Pol Pot regime.

Preah Vihear is located in the north of Cambodia right on the border of Thailand. There has been some dispute over the years about which country Preah Vihear belongs to. However, UNESCO declared the site to be a part of Cambodia.

This is one of the most stunning temples in the whole of Cambodia. It is situated on top of a 500m tall cliff overlooking the low-lying flatlands of neighbouring Thailand. It was once the favourite temple of many Khmer kings and queens and has been modified extensively over the years.

Kampong Thom is a province located next to Siem Reap province. It’s not popular with tourists, but is home to some of the best temples in the country. As a result, you can enjoy exploring these temples in peace and quiet when compared with the world famous Angkor Wat.

Sambor Prei Kuk was the capital of the Chenla in the 7th century and predates Angkor Wat by around 400 years. It was formerly part of the Funan kingdom and is a perfect example of very early Khmer architecture. It’s a temple not to be missed and the ruins are very picturesque.